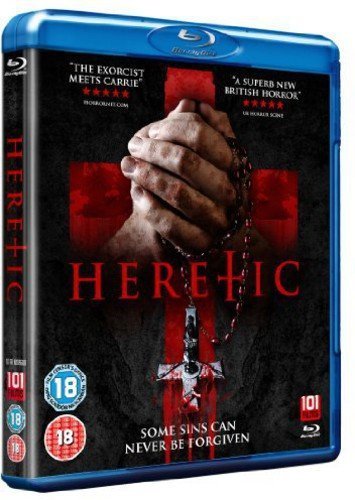 Father James Pallister (Andrew Squires) is a catholic priest haunted by his own failure to protect Claire (Jen Nelson), a young, vulnerable girl who committed suicide shortly after seeking his help. With his faith shaken and alcohol as his only crutch James is forced to return to his old parish when the girl’s stepfather dies in similarly self inflicted circumstances. But when James becomes trapped in the derelict house where the girl took her life he starts to see visions and ghosts of mistakes past. With both Claire and her stepfather seemingly seeking revenge for their fates James must try and escape the old mansion before their final resting place becomes his own.

With all of the classic ghost story elements in place (small sleepy village, eerie house and a tragic death), Heretic is a quintessential tale of guilt, remorse and revenge from beyond the grave. While it sticks to the conventions of this genre for the most part there is enough variety to avoid the whole film feeling stale, with the religious themes in particular likely to inspire introspective and debate once the lights have come back on. Peter Handford should be commended for shunning modern horror’s obsession with the jump scare for a slow burning tension that subtly draws the viewer in, with the on screen action playing out like an adaptation of an M.R. James or Susan Hill story before dovetailing into a more visceral, psychological thriller in the final act.

While the majority of the cast are solid Andrew Squires deserves a special mention for his accurate and engaging portrayal of the inner turmoil of a man struggling with both a crisis of faith and his own guilt over the death of his young charge. For the majority of the file James is a quiet and subdued character but Squires still manages to bring a great deal to the role, leaving you with the impression that the young priest was struggling with his faith long before Claire decided to kill herself. The cinematography is good throughout and we are never quite sure which of the visions are actually happening and which are simply in the young priest’s head, and both the score and the editing are top notch. The story proceeds at a good pace and does an excellent job of filling in more details as things progress, drip feeding just enough information to keep the audience interested while keeping enough back to add a sting in the tail.

Unfortunately, by the time the twist does come, things have become a little convoluted. A few strange coincidences and narrative devices are employed to drive the film onto its conclusion, and while Heretic is certainly not the first horror to stumble in the final third (and is by no means the worst offender) it’s a shame that such a well crafted and atmospheric story is let down by a slightly heavy handed finale. Some may also find the opening thirty minutes a little slow if used to faster paced horror fare. Straddling the line between psychological horror and old fashioned ghost story, Heretic is a tragic tale of repressed anger and lost hate that will stick with you long after the credits roll. Taking the viewer through a journey through faith, loss, revenge and the limits of conscience this will hopefully be remembered as a great modern day ghost tales.