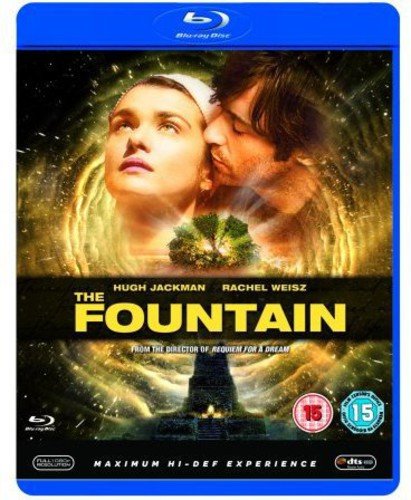 Conquistador Tomás Verde in New Spain fights a band of Mayans to gain entry into a pyramid, where he is attacked by a Mayan priest. The story intercuts to a similar looking man, tending a tall tree in a glass dome biosphere travelling through space, annoyed by a woman called Izzi. Finally, a third iteration, present-day doctor Tom Creo, is losing his wife Izzi to a brain tumor. Tom is working on a cure using samples from a tree found through exploration in Guatemala, which are being tested for medicinal use for degenerative brain diseases in his lab. Izzi has come to terms with her mortality, but Tom refuses to accept it, focused on his quest to find a cure for her.She writes a story called “The Fountain” about Queen Isabella losing her kingdom to the Inquisition and a commission given by her to Tomás Verde to search for the Tree of Life in the Central American forest in Mayan territory. As she does not expect to finish her book, Izzi asks Tom to finish it for her. As they look up at the golden nebula of Xibalba, she imagines, as the Mayans did, that their souls will meet there after death and when the star goes supernova. She dies shortly thereafter and Tom dedicates himself to curing not only her disease but death itself after seeing experimental success in reversing aging. His colleagues fear that this drive has made him reckless, but they support him in his scientific work and emotionally at Izzi’s funeral. Tom plants a sweetgum seed at Izzi’s grave in the manner of a story she told him relating how a Mayan guide’s dead father lived on in a tree nourished by the organic nutrients of the buried body.In the Mayan jungle, Tomás finds that most of his fellow knights are exhausted and refuse to continue searching for the Tree of Life. He takes the few who remain loyal with him to a pyramid, carrying a ceremonial dagger. Once he arrives at the pyramid, the first scene repeats and Tomás engages in combat with the Mayan priest. The space traveller (whether this character is a version of Tom, an element of Izzy’s story, or Tom himself in the future is unclear) spends much of his time performing physical or mental exercises, including a form of meditation allowing him to perceive and interact with the past. In that past, Tomás is stabbed in the stomach but, just as the priest is about to kill him, he appears before the figurehead. The priest now believes Tomás is the “First Father” who birthed all life.

Tomás kills the priest as a sacrifice and proceeds to a pool with a large tree, convinced this is the Tree of Life. Tomás applies some of its sap to his torso and is cured of his stab wound. He drinks the sap flowing from the bark. But in a reenactment of the Mayan creation myth recounted earlier, his body is turned into flowers and grass that burst forth from it and he literally gives rise to new life, killing himself in the process. In space, the tree finally dies just before the spaceship arrives at its destination, much to the horror of the version of Tom tending it. A final vision of Izzi appears, comforting him in the face of his acceptance of death. The star goes supernova, engulfing the ship and everything within. The traveler’s body, engulfed by the dying star inside the nebula, is absorbed by the tree, causing it to flourish back to life. Izzi’s apparition picks a fruit from the new tree of life and hands it to Tom, who plants it in Izzi’s grave.

All in all, I really liked this movie. It brought plenty of drama which makes you care for the characters and their fate, thus keeping you eager to find out how it ends. It’s unique idea manages to be at the same time it’s most important plus but also a bit of a let-down, in terms of connection. I had a very good time with it so I will definitely recommend it to anyone. It brings something new, a fresh idea, and this alone deserves recognition, not to mention the feelings involved throughout.