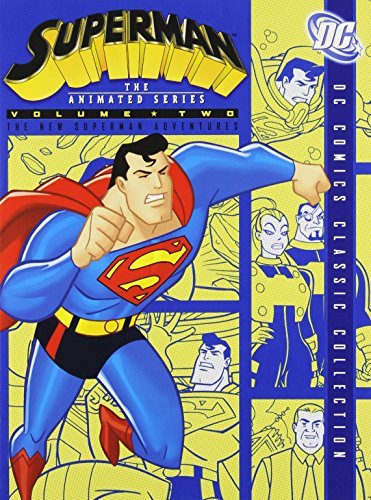 Having written about virtually every Superman TV show released on DVD, I can say with more than a little certainty that the episodes found on The Animated Series – Volume 2 are some of the best Superman stories ever committed to film. Ever. You get it all – the whizzes, the bangs, the imaginative storytelling. After all, any show that has as much fun with Mr. Mxypltk as this one does deserves, in the parlance, “mad props;” seeing that fifth-dimensional imp cry “McGurk!” is both hilarious and classic at the same time.

I went into this set expecting to like it, but not this much. Sure, I’ve always enjoyed the show – the first boxed set was good fun – but I don’t ever recall it being this entertaining. I mean, everyone knows that this series pales in comparison to its predecessor, Batman: The Animated Series, but I think these eighteen episodes prove that Superman: TAS can be just as excellent.

What’s perfect about these episodes is the balance the writers and animators strike between ol’ Supes being perfectly impervious to physical harm and yet imminently vulnerable to real and very human emotional frailty. Superman always suffers complaints that he’s plain too invulnerable – there’s nothing interesting to do with a character who can shrug off meteors like they were dandelions. But rather than offering yet another series of action set pieces or a collection of purely existential crises, this show gets it right, balancing the man with the super in a serendipitous combination that reminds audiences why he’s such an enduring and beloved character.

Take for example the Metallo episode “Action Figures,” in which the partly-human T-1000 finally emerges from his long walk across the bottom of the Ocean (where Superman sank him last season), having lost his memory. He arrives on an island that is being used as a volcanic research station where he makes friends with two little kids who are at first frightened of him, but quickly come to adopt him as a pet, or perhaps their own personal superhero.

Of course, the villain slowly regains his memory and reveals himself to be anything but a hero. Hearing reports of a robotic creature on the island, Clark Kent comes to investigate and quickly learns that his suspicions are confirmed: Metallo has returned. Naturally, the two duke it out, but not just in any old way; during the course of their fight the volcano on the island erupts, forcing Superman to save the civilians and battle the villain simultaneously. I’m sure that having one’s head dunked in flowing lava is painful, even for Superman. This episode is a great example of the balance between action, meaningful storytelling, and plain old cartoon fun.

Mxyzpixilated is probably my favorite episode out of the bunch. It features the introduction of one of Superman’s goofiest (and funniest) villains, a fifth-dimension sorcerer imp named Mr. Mxyzptlk (Mix-Yez-Spit-Lick) who can only come to our dimension every ninety days. He makes a deal with Superman: if Supes can get him to say his own name, he’ll return to where he came from until the next inter-dimensional window is open, three months later. Of course, Superman finds creative ways to foil the little gnome every time.

One of the episode’s gags had me laughing out loud. Frustrated with his failure, Mxyzptlk is seen in his home, over the three month period, constructing a massive robot battle-suit. A good three minutes is devoted to an amusing montage of him putting the thing together. Finally the moment of truth arrives: he jumps in the suit and teleports to Metropolis, ready to destroy Superman. However, we don’t follow him – the camera stays in his room. Five seconds later he teleports back, stomping around in the suit, obviously foiled again, “NUTS NUTS NUTS!” You’re led to believe the whole thing will lead to a massive Superman/Giant Robot showdown, and the episode (written by the excellent Paul Dini) has a great time undercutting the situation for humorous effect.

Brave New Metropolis gives us an alternate world where Lois dies and Superman becomes a fascist. Monkey Fun is essentially Superman versus King Kong. Ghost in the Machine sees the return of Brainiac. And World’s Finest is the excellent three-episode “movie” that sees Batman team up with Supes to take down the villainous duo of Lex Luthor and the Joker. These are all great Superman stories, making good use of the character’s strengths and smoothing over his weaknesses. The ratio of killer-to-filler episodes in this box is very high (in the good sense) and is easily equal to Batman’s best run. I went into this set expecting to have a good time, and I’m delighted to report that my expectations were off. I had a great time.