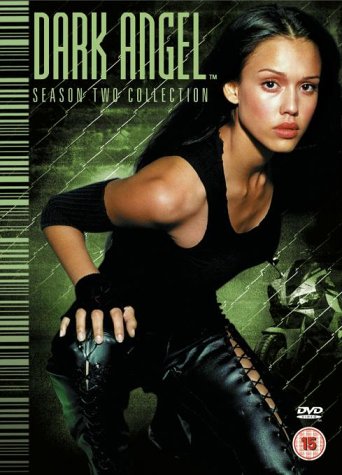 James Cameron’s and Charles H. Eglee’s Dark Angellasted a short two seasons back in 2000-2002, launching Jessica Alba’s Hollywood career.  Like Buffy the Vampire Slayer, this show had a similarly headstrong, wise-cracking, female superhero at the helm.Set in the near future in rainy Seattle, Washington, Max was a bike courier by day and thief by night, struggling to get by in Post-Pulse America.  She burgles the wrong rich guy one evening who recognises her for what she is, an escaped genetically-engineered human from Manticore, a secret training facility that creates kids like Max and raises them to become soldiers and assassins.  With rich guy Logan’s (Michael Weatherly) guidance/nagging, Max grudgingly uses her physical and mental talents to do some good in the world.Did I mention she did it grudgingly? Max is not a smiley, cheerful young woman.  Most of the time she’s got a scowl on her face but deep down she’s got heart, and despite the tough, ‘I don’t care about anyone but myself’ front she puts up, she’s still a normal young woman trying to put the trauma of being raised to be a weapon of destruction  behind her.  The torture and abuse she suffered as a child at the hands of those in Manticore still haunts her. Max was among a dozen children that fled the prison-like institution ten years previously.  She tries to keep a low profile, fearful that her worst nightmare and personal bogey man Lydecker (played chillingly by John Savage) will find her.  She’s also trying to track down her “brothers” and “sisters”, the other kids who fled.  Logan agrees to help her in this quest in exchange for her help with his noble causes.  Logan is “Eyes Only”, an underground journalist and thorn in the side of criminalsKeeping Max company is her best friend Original Cindy (Valarie Rae Miller), Sketchy (Richard Gunn) an idiot who works alongside her and Normal, the grouchy but actually easy-going boss at the courier company Jam Pony.  Normal frequently shouts ‘bip bip’ at his employees in order to motivate them to do some work.  It rarely works!  Along the way we meet Zach (William Gregory Lee), her “brother” who is totally in love with her and Alec (played by hottie Jensen Ackles from Supernatural), another Manticore soldier.   We can’t forget about Joshua (Kevin Durrand), the dog-man, one of Manticore’s earliest experiments that left many of their people/creatures looking decidedly non-human.  They were confined to the basement in Manticore until Max releases them into the world in season 2 with devastating consequences. Max looks after Joshua and along with Alec, the three of them form somewhat of a weird, dysfunctional but tight-knit family.Logan’s and Max’s relationship continues the will they/won’t they line for the duration of the two seasons.  A lot of fans wanted her to hook up with Alec but it never happened, despite a few lingering looks.  I loved the universe and characters of Dark Angel.  It’s one of my favourite supernatural/sci-fi tv shows of all time, right up there with Buffy, Roswell  and The X- Files. The music was great, the characters awesome and the dialogue snappy.  For me, the most intriguing character was Lydecker.  Yes he was a bad guy, but in a creepy way he was also like the father figure of the group.