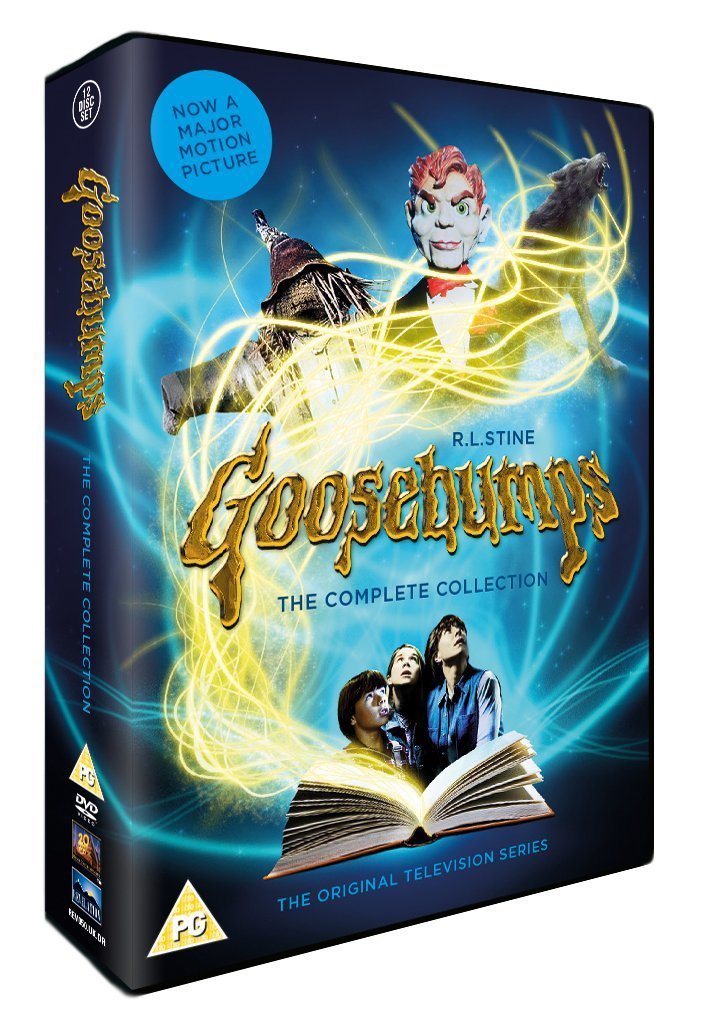 I’m not going to waste too much time talking about the new intro since it’s mostly just showing a compilation clips from most of the episodes from the last 3 Seasons just done at a faster pace, with an added lightning effect, and Slappy’s voice telling “Viewers to Beware”. However, I will say that while being far from a bad opening for how energizing and quick it is in terms of pacing and visuals being thrown at you, it’s nowhere near as memorable as the original intro since it’s iconic and gave us time to look at some fun visuals made for the intro, before giving us a clip montage.

HOW I GOT MY SHRUNKEN HEAD

Mark is a kid who wishes to one day explore the jungle, finally gets his chance when he’s invited to go an expedition with his Aunt Benna after receiving a package with a shrunken head inside it that carries supernatural powers. Upon arriving to the Pacific Jungle Island of Baladora, Benna has mysteriously disappeared, and Mark suspects something strange with the other doctors that partake in the expedition.

When the episode began, I was invested and find myself constantly interested in what was going to happen next as it moved on. But when knowing the show’s formula at this point, you can pretty much tell who’s going to be the bad guy, and if the Aunt is still alive and well, which is kind of disappointing that the episode doesn’t offer that many unique twists and turns. Not to say that the story itself isn’t engaging because it is thanks to its jungle setting, the mysteries surrounding the supernatural powers of the shrunken head, and the characters. Though the episode does have its problems with its predictable story-line, the hokey acting from our lead, some of the supporting characters being pointless, and the effects looking awful at the climax, there’s still plenty of good in it. The story’s setting, and the myths revolving around the shrunken head is intriguing. The characters are likable and interesting. The acting for the most part is good. And the effects and the episode’s overall look are fun and at times cool to look at. It’s not one of the greatest episodes from the show, but it’s not a bad or mediocre one either.

THE GHOST NEXT DOOR

Hannah discovers that she has a new neighbor named Cody who lives next door. But the house next to hers is an old abandon house that no one has lived in for quite some time. Curious to why he’s living there, and not ever seeing him or his family move-in, she suspects something strange about him. And upon almost every time that she encounters Cody, she seems to be haunted by a mysterious shadowy specter when he’s not present.

Not too long ago, I was watching a video of the “Top 5 Best Goosebumps Episodes” from Channel Awesome’s very own Walter Banasiak, and when I found out that one of the episodes from this Season was on the list, I was quite curious to see this episode for the first time, wondering if its as good as he made it out to be. When the episode began though I was interested, I knew or had some kind of idea of what the first part was building-up too. And while watching the first 19 minutes of it, I kept thinking to myself “when is this episode going to wow me”, it’s so predictable! But when we got to the end of the first part my jaw dropped as I reacted with awe. And when the second part started I was hooked and eager to learn about what everything going on in the first part was all about. Granted I’m not going to act like that this is the first horror anthology kid’s show to pull off this kind of twist, and there are a few things that I’m not quite clear about in terms of logic, but overall it’s still all executed brilliantly!

CRY OF THE CAT

Movie star Allison Rogers is staring in a horror movie about an evil cat, but little does she know that the film’s subject matter is going to become reality for her after she accidentally hits a cat with her bike. The cat turns out to still be alive, but is now coming after Allison for taking away one of his nine lives.

When the episode started out, I had no idea where it was going. There’s a demonic cat that’s attacking two kids in a dark house, and they hire some kind of Exorcist to get rid of it, but gets killed by the cat off-screen as the kids are then left to fend for themselves. I wasn’t sure if this was supposed to be a previous encounter with the cat before meeting our real main characters, or if the episode was starting out in the middle of the events to then giving us a flashback leading up to everything that we just witnessed. But once I found out that this was a film that the characters are in, I was kind of disappointed that everything I saw was fake, but quite intrigued to see the series take a different route. Usually with a premise like this, the story would be set in some kind of suburban neighborhood with a bland kid that just gets in the middle of it. But instead it mostly takes place on a studio lot with our lead being an actor, which I was not at all expecting in an episode like this. It’s true that when I see the characters shoot scenes for the movie, I was curious to know the full plot, and frankly would love to see it as a whole entire episode for how foreboding, intense, and a tad bit silly it is (I mean really a pet Exorcist). But the actual story that we’re given for this one is still good enough, where I became just as engaged in the premise as I did with the previous two episodes. Much like “How I Got My Shrunken Head”, this is a good if not great or memorable episode. It has a nice change of setting, some good performances, mostly cool effects, and a scary monster. It does have its flaws in terms of clunky writing, a few forgettable or dull performances, and some odd designs and effects, but it’s far from being a bad one. And if you’re curious to see “Goosebumps” take on cats, chances are that you’ll be satisfied at their attempt.

Billy and Sheena are visiting their Uncle Harold in the Caribbean, but find their stay to be quite boring as their Uncle spends more time working on experiments in his basement than he does with his niece and nephew (why does that sound sooo familiar?). The kids discover a few weird things on the Island and in their Uncle’s lab, and eventually find themselves marooned on an uninhibited Island with their Uncle to fend themselves against giant creatures, and a mysterious monstrous cult. I’ve heard many fans complain about how this episode strays from the book, but as I’ve stated in my review on “Teacher’s Pet” in the show’s third season, I am only judging these episodes on their own merits. However, from my research it turns out that this episode is an adaptation to “Deep Trouble 2”, and though I feel like the first story should get an adaptation, at least the episode is not trying to confuse audiences who haven’t read the books like they did with “Night of the Living Dummy 2” or “Return of the Mummy”. But then again, it definitely hasn’t pleased the people who read the books.

The setting for the story isn’t bad, I do like the idea of having clues in the first part, and having the second part of them trying to escape from monsters, but the execution while not awful, is not as good as it sounds. The characters are nothing new at all. You have one kid who’s adventurous and obnoxious, as the other one is reluctant; the scientist family/relative who’s responsible (or at least partly responsible) for the weird things that happen; and your predictable twist villain, who doesn’t seem normal when he tries to act it. And none of these performances bring anything special or charming to their characters to make to overlook how cliched they are. The only real interesting about any of them is some of the people they casted that appeared in previous installments to the series. This episode is easily the weakest one in this season for it’s recycled characters and monsters; dull performances; and some really bad effects. But it’s still watchable when compared to the many others in the series. The story does keep your attention, and there are some really neat and inventive effects and designs. It’s just a shame that this is the very last episode to close the show with for how mediocre it is when any one of the other episodes from this season (especially “The Ghost Next Door”) would’ve been a better choice to cap the series.

Going into this season, I expected this to be terrible since none of the episodes are hardly ever talked about as the ones in the past 3 seasons, but I was gradually surprised that there wasn’t any episode that I found to be unwatchable or horrible. The last episode was mediocre but it’s not as boring or horrific as episodes like “You Can’t Scare Me”, “Go Eat Worms”, and “Don’t Go to Sleep”. Every episode in this season did offer at least something good and impressive. But though the series worst episodes come from all the other season’s, I still do consider this season to be the series’ weakest. And why you may wonder since I had something good to say about all of them, well aside from “The Ghost Next Door”, all the other episodes are forgettable for how average they are. There’s hardly anything about them that makes them stand-out as anything special, since they share nearly the same amount of pros and cons. At least with the other seasons they for the majority had plenty of episodes that were more memorable when compared to this one. You remember the great ones for how scary and inventive they were, but you also remembered the awful ones for how ridiculous and beyond cheesy they were too. So while this season isn’t bad, I’m still at the end of the day going to remember most of the episodes from the other seasons than I will with the ones from this one.