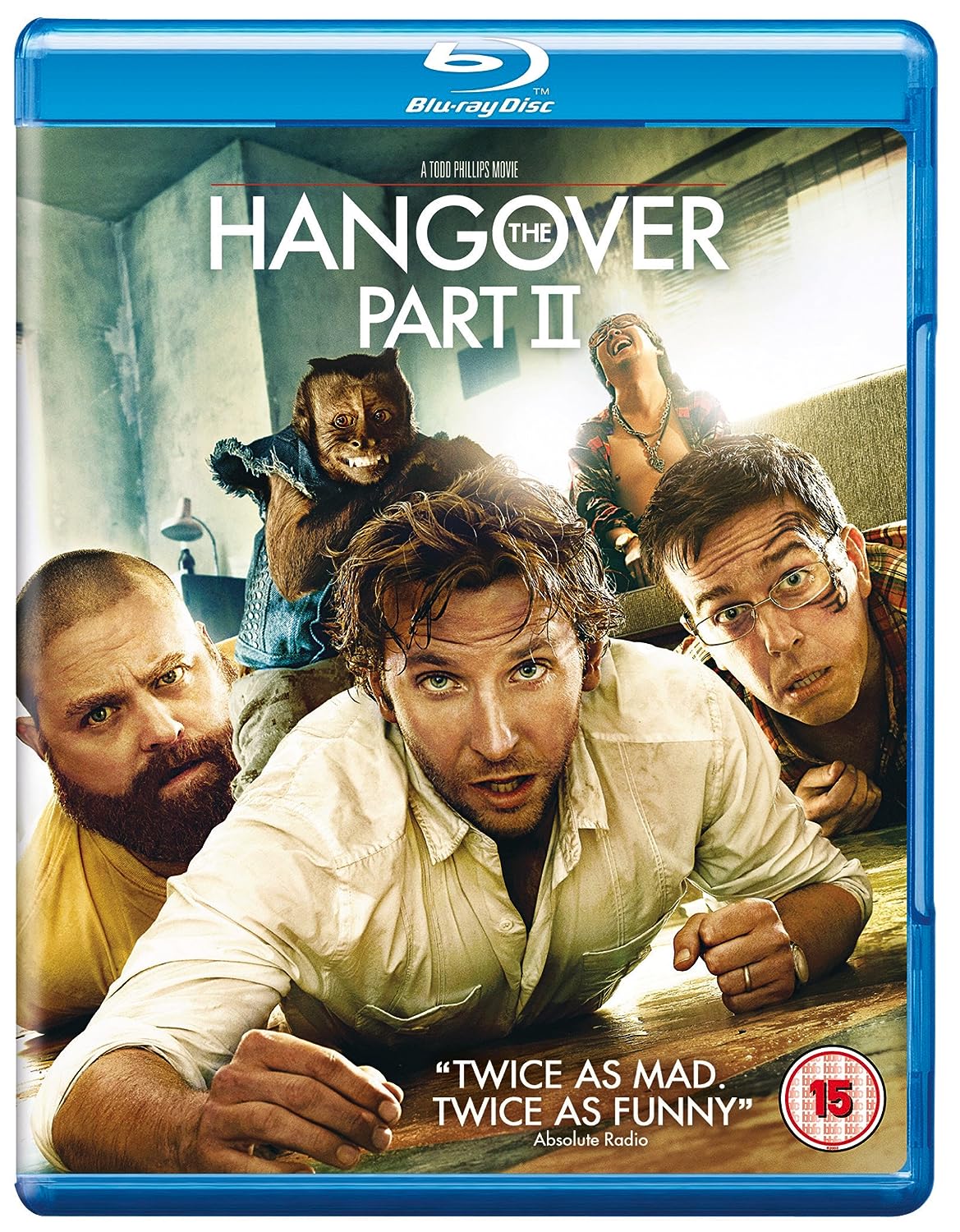 Two years after the events of the first movie in Las Vegas, Stu Price, Phil Wenneck, Alan Garner and Doug Billings travel to Thailand to celebrate Stu’s upcoming wedding to Lauren. Much to Alan’s dismay, they are joined by Lauren’s younger brother, Teddy. At the rehearsal dinner, Lauren’s father’s reveals his disapproval of Stu during a toast. Later that night, Stu hesitantly joins Phil, Doug, Alan and Teddy for a beer. Sitting at a campfire and roasting marshmallows, the group toast to Stu and Lauren’s future happiness.The next morning, Phil, Stu and Alan, along with gangster Leslie Chow – whom Alan befriended after Las Vegas – and a chain-smoking capuchin monkey, awaken in a dirty hotel room in Bangkok. Stu has a face tattoo (a replica of Mike Tyson’s) and Alan’s head is completely shaved. They cannot find Teddy, and discover only his severed finger. Chow begins to relay the events of the prior night, but he seemingly dies after snorting a line of cocaine. Panicked, the trio dispose of Chow’s body in an ice box.Through a tip from Doug who is still at the resort (he left the campfire earlier than the others), they go to a police station to pick up Teddy but are given a wheelchair-bound elderly Buddhist monk, who knows more about what happened; however, he refuses to reveal anything, having taken a vow of silence. After finding a business card, they travel to the smoldering ruins of the business. They enter a nearby tattoo parlor where Stu got his tattoo, and they learn that they started a fight that escalated into a riot. The trio returns the monk to his Buddhist temple, where they are encouraged by the head monk to meditate. Alan is able to recall that they had been at the White Lion strip club, where they learn that Stu was sodomized by a kathoey prostitute named Kimmy. Upon exiting, the trio are attacked by two Russian mobsters who steal the monkey, and one shoots Phil in his arm.After Phil is treated at a clinic, Alan confesses that he had drugged some of the marshmallows from the previous night with muscle relaxers and ADHD medication in order to sedate Teddy but accidentally mixed up the bags. Phil and Stu become furious that Alan drugged them again. Stu blames Alan for ruining his life and attacks him. Phil breaks it up and tells them that they have to stick together. They notice something on Alan’s stomach: an address and a time for a meeting. They meet a gangster named Kingsley, who demands Chow’s bank account password by the next morning in exchange for Teddy. They return to the hotel to try to find Chow’s password, only to discover that he is still alive. They steal the monkey (who had the code given to him and put inside his jacket for safe-keeping by Chow) back from the Russian mobsters through a violent car chase, during which the monkey is shot and injured. After taking the code and leaving the monkey at a veterinary clinic, the group completes the deal with Kingsley. Suddenly, Interpol agents appear and arrest Chow. Kingsley turns out to be an undercover agent, who tells the trio that the police had used the information that Teddy had disappeared to arrest Chow and Kingsley actually does not know where Teddy is.Desperate and out of clues, Phil calls Doug’s wife Tracy to tell her they can’t find Teddy. Stu decides to call off the wedding and live in Bangkok and say that Teddy died. While Alan is playing a game of PAC-MAN the power goes out again. Stu suddenly realizes where Teddy is. The trio rushes back to the hotel to find Teddy who is in the elevator unharmed (albeit still missing a finger). Teddy had woken up in the middle of the night to get more ice for his severed finger (after the first bucket of ice had melted) but became trapped after the power went out. The four use Chow’s speedboat, the Perfect Life, the keys for which were in Teddy’s pocket, to travel back to the wedding reception.Arriving on land just as Lauren’s father is about to cancel the wedding, Stu makes a defiant speech where he rejects being boring and instead states that he is in fact quite wild. Impressed, Lauren’s father gives the couple his blessing. After they exchange their vows, Alan presents Stu with a special gift at the post-reception dance: a musical guest performance by Mike Tyson. Teddy later discovers that he had taken many pictures during the night on his cell phone. The group, along with Tyson, agree to look at the pictures together once (some of which reveal Teddy lost his finger playing the knife game) before erasing the evidence of their exploits once again.Since The Hangover Part II is basically a repeat of the first film, it ups the R-rated humor to get a leg up. The jokes are dirtier, and the nudity is less shocking than tedious. The Hangover Part II  is funny. At least some of it is, thanks to Cooper, Helms and Galifianakis, who have a damn good thing going.