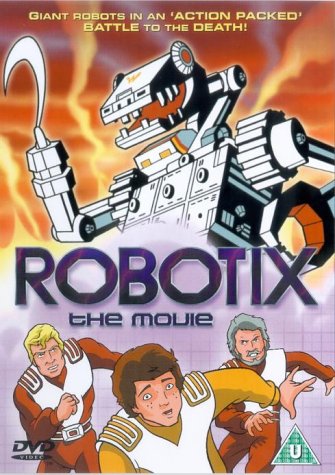 Note: Robotix The Series and The Movie are the same thing, The series of shorts were put together to form this movie.

An Earthling crew of astronauts lose control, and crash land onto the warring planet of Skallor, housing alien races known as the “Protectons” and “Terracores.” Huge war robots, the Robotix, are used to re-animate the souls of the deceased alien races. As several of the astronaut crew stray towards evil-doing, the good members use the help of the Robotix to help them get back to Earth.

Having watched Robotix recently for the first time in years I can say I was surprised by how frankly brutal it was. The animators must have figured that, hey, these are robots so we’ll be as mean as we want to them. Even shows like Transformers balked at showing too much violence done to their metallic heroes. Not so with Robotix: when one robot swings a huge pipe at another robot’s back, it connects. Legs, arms, and heads are ripped off, faces are slammed into the dirt. Startlingly, most of this violence is done to the protagonists. The villains constantly get the better of the heroes and deal out vicious poundings — even to the “female” robot.

Perhaps more startlingly, the violence is dished out in fair portions to the humans. Not even the little boy, Zaru, is safe. In one scene, he is quite harshly knocked aside by the leader of the evil robots. In a later scene, the leader of the good robots slams one bad guy human into a wall with great force, apparently killing him. My favorite scene involves the leaders of the rival human forces, Exedore and Kanawk, the “hero” and the “villain” respectively. They are in a ship which has lost atmosphere. Kanawk shatters the hatch of Exedore’s capsule to suffocate him. So Exedore pulls out a gun and blasts the hatch off of Kanawk’s capsule! For a cartoon “hero” in 1985 that’s quite a thing to do! All in all, it has its flaws but it is surprisingly well-made for a cartoon based on an unpopular and widely unknown toy.