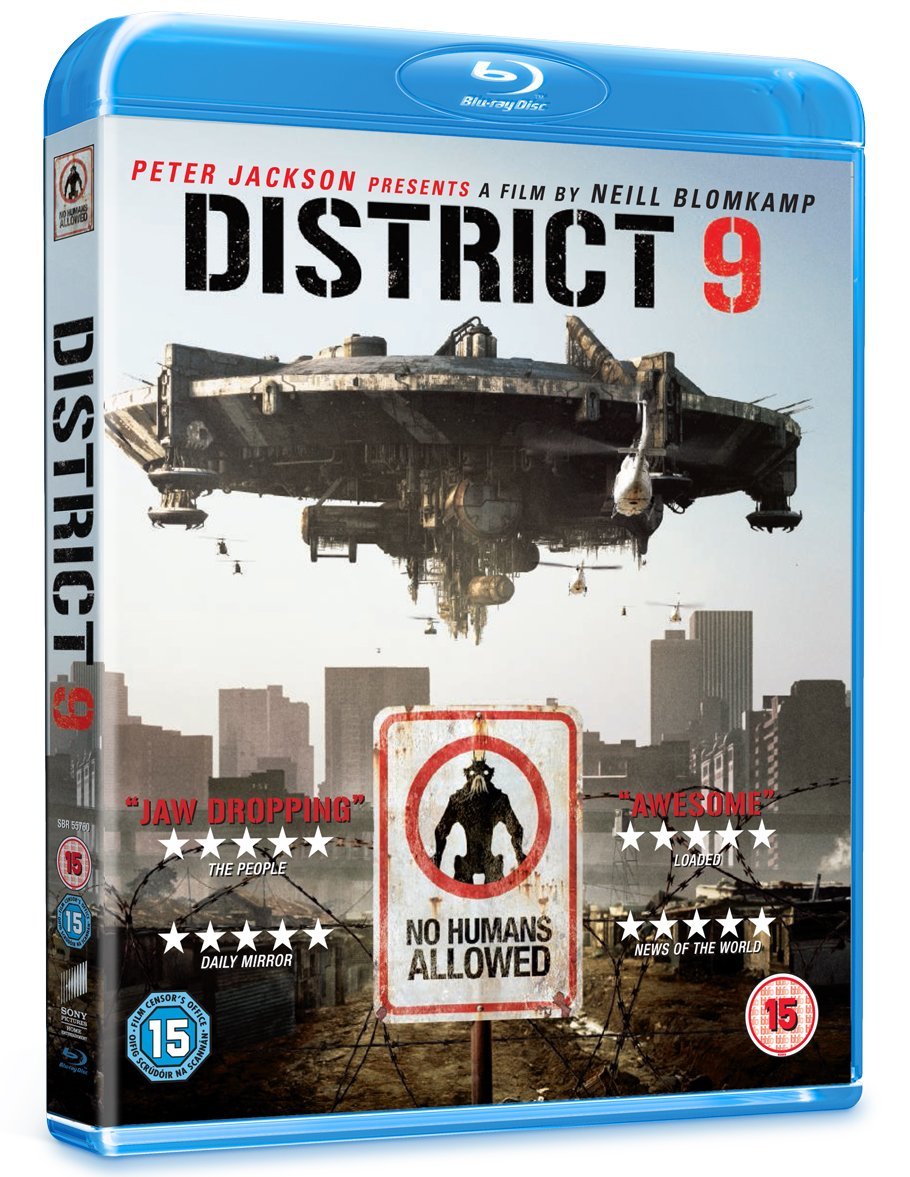 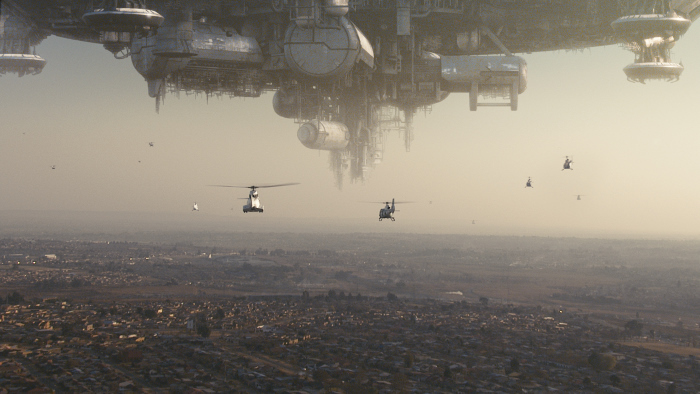 In an alternate 1982, an alien ship inexplicably stops over Johannesburg. When investigation teams enter the ship, they discover a population of sick and malnourished extraterrestrials, referred to as “prawns”. The South African government confines the aliens to “District 9”, a government camp that is located outside of Johannesburg. Twenty-eight years later, in 2010, following periodic conflict between the aliens and the locals living near District 9, the government hires private military company Multinational United (MNU) to relocate the aliens to a new internment. Wikus van de Merwe (Sharlto Copley), an Afrikaner bureaucrat, is appointed by Piet Smit (Louis Minnaar), an MNU executive and his father-in-law, to lead the relocation. Meanwhile, three aliens — Christopher Johnson (Jason Cope), his son, and a friend — scavenge pieces of their technology from which they distill a fluid of their native provenance, and store it in a small canister. Wikus confiscates the canister from the shack of Christopher’s friend, but accidentally sprays some of the fluid onto his face. Christopher’s friend is subsequently killed by Koobus Venter (David James), a sadistic mercenary soldier employed by MNU. 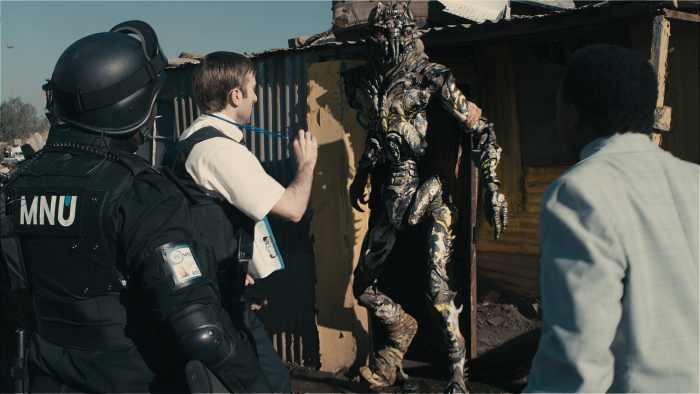 Under the fluid’s influence, Wikus’ body, starting with his injured left arm, begins to deteriorate and become alien tissue. He is immediately detained and transported to MNU headquarters for experimentation, where it is discovered that Wikus’ chimeric DNA grants him the ability to use alien weapons- which are biologically restricted to work for alien users only. Realizing the potential fortune to be made from Wikus’ tissue in its current state, Smit and his scientists decide to vivisect Wikus; but he overpowers them and escapes the facility. Smit orders Venter and his men to hunt Wikus down, while a smear story is published that claims Wikus has been engaging in sexual activity with aliens and is a fugitive infected by an alien STD. Everyone believes the story, even, for a time, Wikus’ wife (and Smit’s daughter) Tania (Vanessa Haywood). 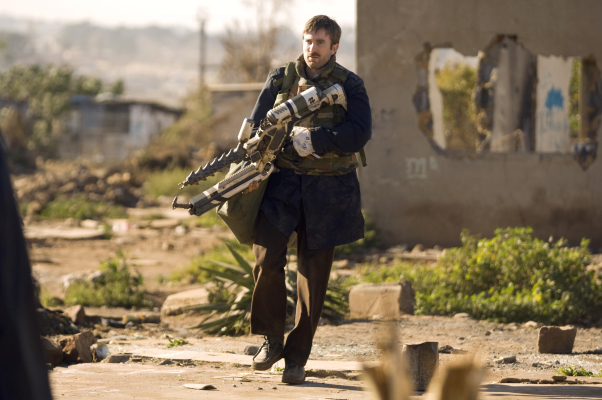 Wikus finds refuge in District 9 and stumbles into Christopher’s shack, where he learns that Christopher is hiding the lost command module of their spacecraft underground. Christopher discloses that the fluid in the canister would allow him to reactivate the command module and the dormant mothership, in which he claims he can reverse Wikus’ mutation. To recover the canister from MNU headquarters, Wikus obtains alien weapons from superstitious Nigerian arms-dealer Obesandjo (Eugene Khumbanyiwa) and his gang, then he and Christopher attack the MNU offices, retrieve the canister, and flee to District 9 with MNU forces in pursuit. Appalled by the illegal experiments on his fellow aliens at MNU headquarters, Christopher decides to get help before curing Wikus, which will take three years. Frustrated, Wikus knocks out Christopher and attempts to fly the command module to the mothership, but is almost immediately shot down by Venter and his men. They capture Wikus and Christopher, but Obesandjo’s gang intervene and seize Wikus, acting on Obesandjo’s belief that eating Wikus’ transformed arm will enable him to use alien weaponry. Obesandjo’s base is then attacked by MNU. 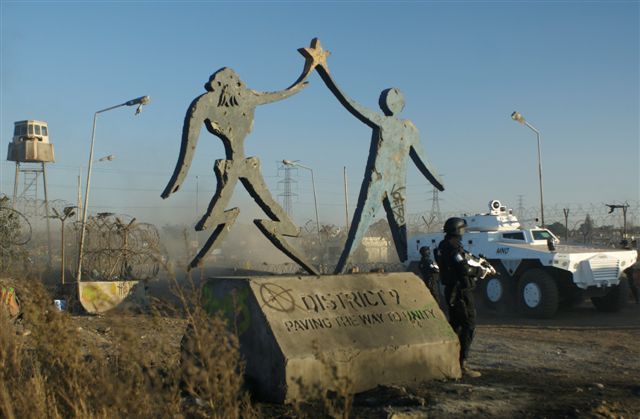 In the command module, Christopher’s son remotely activates the mothership and an alien mechanized battle suit in Obesandjo’s base which kills Obesandjo and his men. Wikus takes control of the battle suit and rescues Christopher, who promises to return in three years with a cure. Wikus kills all the attacking soldiers before Venter cripples the suit, which ejects Wikus. As he corners Wikus, a group of aliens kill Venter by tearing him apart. The command module with Christopher and his son is lifted into the mothership, which they use to leave Earth, and Johannesburg’s residents celebrate its departure. A series of interviews and news broadcasts are shown speculating about Wikus’ whereabouts and the potential return of Christopher and the spacecraft, and what it may entail. MNU’s illegal experiments are exposed by Wikus’ friend and assistant Fundiswa (Mandla Gaduka), and District 9 is demolished; all the aliens are subsequently moved to the larger District 10. Tania finds a metal flower on her doorstep, giving her hope that Wikus is still alive. The final scene shows a fully transformed Wikus in a junkyard, crafting a similar flower. 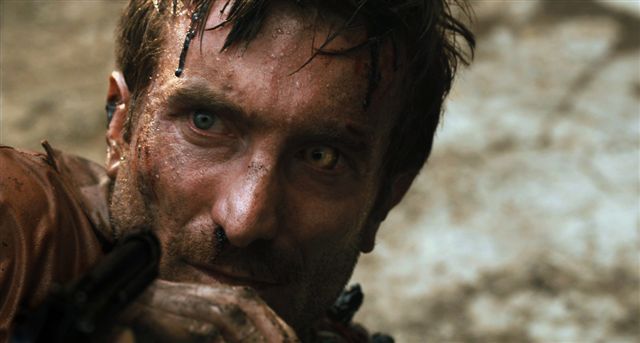 Rarely in the sci-fi genre has a movie been so deep dealing with so many issues through prejudice, mans inhumanity and cruelness and large corrupt companies. Central to it is the superb performance of Copley and his bond with the alien Christopher. Blomkamp has fused a great story together and created a classic sci-fi flick that I enjoyed immensely.