Perseus (Sam Worthington), a son of Zeus (Liam Neeson), lives as a fisherman after the death of his wife, Io (portrayed by Gemma Arterton in the previous film), with his young son, Helius (John Bell). Zeus visits Perseus and asks for his help, saying that humans are not praying to the gods and as a result the gods are losing their power and becoming mortal and can no longer sustain the walls of Tartarus which are crumbling, and the imprisoned Titan Kronos will soon be free. Perseus, valuing his family’s safety, refuses to get involved.

Zeus meets his brothers Hades (Ralph Fiennes) and Poseidon (Danny Huston), and his son Ares (Édgar Ramírez) in Tartarus. He asks Hades’s help in rebuilding Tartarus’s walls, but Hades rejects the offer and attacks Zeus. Ares betrays Zeus, imprisoning him and stealing his thunderbolt. Hades and Ares plan to make a deal with Kronos: in exchange for remaining immortal, they will drain Zeus’s divine power to revive Kronos. The walls of Tartarus break unleashing monsters onto the world.

After killing a Chimera that attacked his village, Perseus travels to meet his father. He instead finds a dying Poseidon who informs him of the circumstances and tells him to find his Demigod son Agenor (Toby Kebbell) who will lead him to Hephaestus, who knows the way into Tartarus. Poseidon then gives Perseus his trident and succumbs to the injuries he sustained when meeting Hades and dissolves into dust. Perseus, Andromeda (Rosamund Pike), and Agenor set out to find Hephaestus on a hidden island. Agenor explains that Hephaestus created three weapons which Zeus, Hades, and Poseidon wield: Zeus’s thunderbolt, Hades’s pitchfork, and Poseidon’s trident, and that these weapons can jointly form the Spear of Trium, the only weapon that can defeat Kronos. After an encounter with 30 ft. Cyclopes, the travelers eventually meet the now mortal Hephaestus (Bill Nighy) and reach the entrance of a labyrinth leading to Tartarus. Hephaestus sacrifices himself during an attack by Ares to enable Perseus, Andromeda, and Agenor to enter the labyrinth. 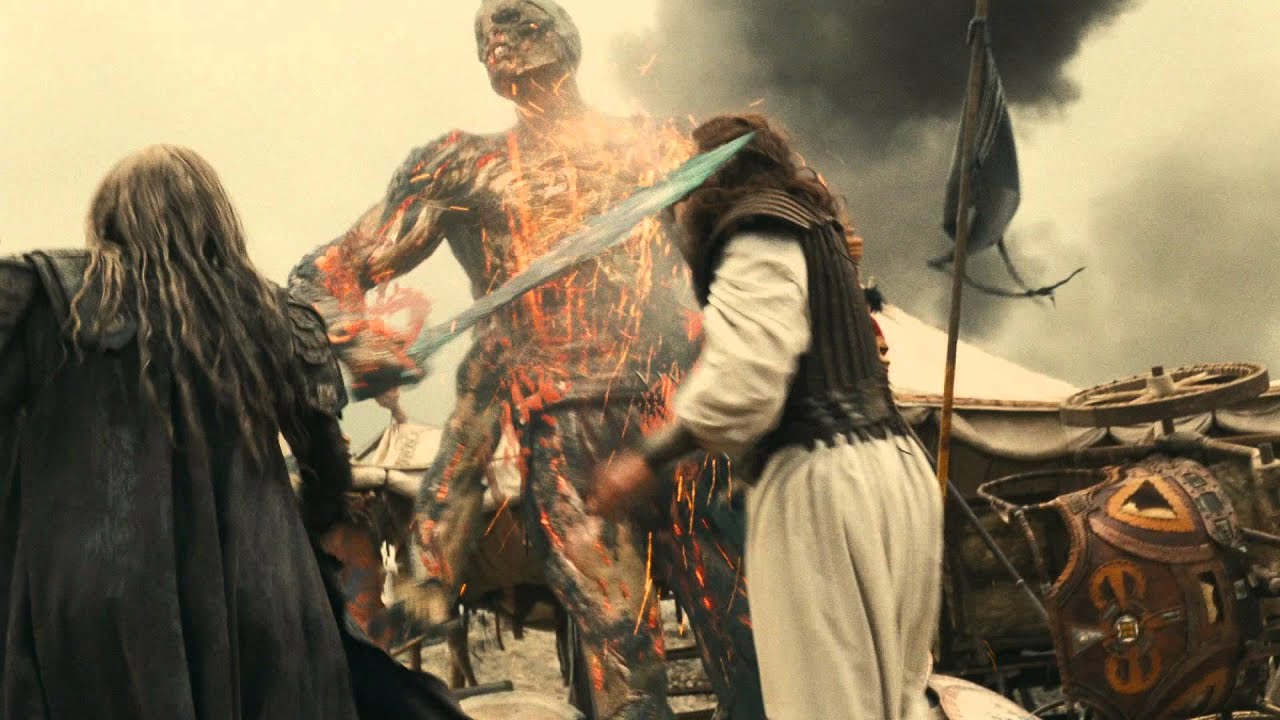 The group eventually enters Tartarus. Meanwhile, Zeus has been almost entirely drained of power as Kronos awakens. Zeus apologizes to Hades for banishing him to the underworld and asks his forgiveness, as he has forgiven Hades for his actions. Hades decides to help Zeus and stop Kronos in contrast to Ares who still wants to proceed to the former’s revival. Perseus arrives and frees Zeus. Ares wounds Zeus with Hades Pitchfork, allowing Perseus to obtain it before he and the others escapes Tartarus with Hades.

Aiming to retrieve the Thunderbolt from Ares in order to defeat Kronos, Perseus challenges him to a duel, which Ares accepts. Meanwhile, Andromeda’s army is overwhelmed by the Makhai, but Hades revives Zeus which leaves Hades less powerful and they defeat the creatures. Kronos appears and begins to attack Andromeda’s army. Zeus and Hades hold off Kronos while Perseus duels Ares eventually killing him with the thunderbolt. Combining the gods’ weapons into the Spear of Trium, Perseus destroys Kronos, traveling to his heart and throwing the spear into it. Zeus reconciles with Perseus and then dies of his wounds as he dissolves. Hades tells Perseus that now he is powerless and leaves. Perseus kisses Andromeda. Helius tells his father that he wants to return to his life as a fisherman, but Perseus tells him they can’t. He tells Helius that he should be proud of himself, as his son and the grandson of Zeus. The film ends with Perseus giving his sword to Helius.

Short and sharp, this is an action packed movie that just doesn’t give you time to draw breath.The beautiful English Rose, Rosamund Pike plays Andromeda. A great film!