Molly (Kate Hudson) and Carl (Matt Dillon) are preparing for their wedding day in Hawaii, until Carl’s friend Neil (Seth Rogen) interrupts to say that Randolph Dupree (Owen Wilson) got lost. They drive off together to pick up Dupree, who appeared to have hitched a ride with a light plane after landing on the wrong island. A day before the wedding, Molly’s father (Michael Douglas), who is also CEO of the company that Carl works for, makes a toast with humorous remarks at Carl’s expense, foreshadowing a conflict between the two. Later at a pre-celebration at a bar, Carl neglects Dupree to be with Molly. Carl and Dupree later make up on the beach, as Dupree apologizes for laughing at Molly’s father’s jokes. Carl and Molly get married. When Carl returns to work, at Molly’s father’s Thompson Land Development, he is surprised to find that Mr. Thompson has promoted him to be in charge of a design he proposed, though it had been altered somewhat.

Mr. Thompson makes absurd requests which proceed to get worse, starting with Thompson’s drastic reimagining of Carl’s new architecture project and that Carl get a vasectomy to prevent any future children with his daughter. Before returning home to celebrate his promotion with Molly, Carl stops by the bar, where he finds Neil and Dupree. After Neil leaves, Dupree reveals that he has financial problems, such as being evicted from his home and losing his job and car. Carl and Molly take Dupree into their home, though clearly they are frustrated as he is disruptive and messy. Molly sets up Dupree with a woman at her work, a primary school, who is a Mormon librarian. Dupree agrees, though Molly is shocked to find them having graphic sex when she comes home from dinner. Romantic candles burn down the front of the living room, and Dupree is kicked out.

Meanwhile, Carl is being continually stressed out from work, though he and Molly find time to go out for dinner. On the way back they find Dupree sitting on a bench in heavy rain with his belongings. Dupree reveals that the librarian had just dumped him. Feeling pity, Molly insists they take him back in. Dupree apologizes for being disruptive and agrees to mend his ways. The next day, Dupree makes amends, refurbishing the living room, and doing Carl’s thank-you letters, as well as making friends with kids from the block. Dupree cooks a large dinner for Molly and Carl, though Carl is late again, so Molly and Dupree start without him. When Carl finally shows up, he is a little jealous that they were having dinner together, and have a fight. Carl kicks Dupree out, suspecting an affair, which shocks Dupree. The following night, Mr. Thompson is over for dinner. Dupree attempts to sneak back in to their home, but fails and falls off the roof. He is found outside and is invited in for dinner.

After Mr. Thompson takes a liking to Dupree and asks him to go fishing with him, it enrages Carl because even though he doesn’t like fishing, it’s Mr. Thompson’s way of approving someone. Carl jumps across the table and attempts to strangle Dupree; Mr. Thompson hits Carl over the head with a candlestick shortly after. After returning from the hospital with a neck brace, Dupree and Molly confront Mr. Thompson about what he really thinks of his new son-in-law, while Carl had left. The next morning, Dupree gets all the local kids to search for Carl. Dupree eventually finds Carl in the bar, and convinces him to chase after Molly. Dupree helps Carl break in to Mr. Thompson’s office and confront him. The two finally reach an understanding and Thompson admits to his agenda of insulting Carl. Dupree and Carl return to the house, where Carl and Molly reunite, Carl apologizing, and agree to work it all out. All turns out well, with Dupree becoming a motivational speaker, Carl and Molly spending more time with each other, and Mr. Thompson accepting Carl as family. In a post-credits scene, then-famed bicyclist Lance Armstrong is seen reading Dupree’s motivation book. 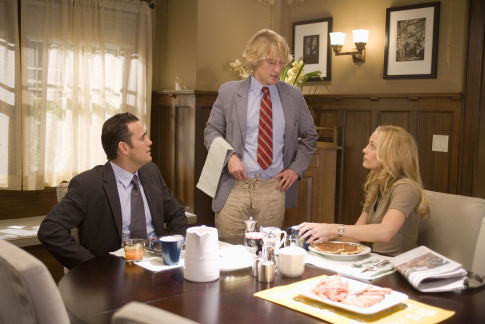