Lanie Kerrigan (Angelina Jolie), a successful reporter for a Seattle television station interviews a self-proclaimed prophet, Jack (Tony Shalhoub), to find out if he really can predict football scores. Instead, Prophet Jack not only predicts the football score, and that it would hail the next day, but also that she would die in seven days, meaning the following Thursday. When his first two prophecies turn out to be correct, Kerrigan panics and again meets with Jack, asking him for another prophecy so that she can prove it wrong, which would imply uncertainty of her death. Jack tells her that there will be a relatively significant earthquake in San Francisco at 9:06 am; she hopes that it will be wrong but again it also becomes reality. Now Lanie becomes sure of her upcoming death and is forced to reevaluate her life.  The remainder of the storyline, which runs for the week of the prophecy, revolves around her attempts at introspection. She seeks consolation in her famous baseball player boyfriend Cal Cooper (Christian Kane), and in her family, but finds little there. 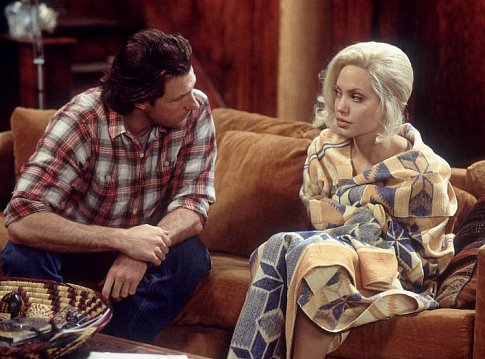 Her lifelong ambition, that of appearing on network television, begins to look like a distant dream. In her desperation, she commits professional blunders, but ends up finding support in an unlikely source: her archenemy, the cameraman Pete Scanlon (Edward Burns), with whom she once had casual sex; he introduces her to a new approach to life. Pete tells her to live every moment of her life and to do whatever she always wanted to do. Lanie implements Pete’s advice; she moves in with Pete for a day, he introduces her to his son Tommy (Jesse James Rutherford) who lives with his mother who had separated with Pete, and they spend a whole day together with Tommy; that night they sleep together for the second time. The next day Lanie receives an opportunity for a job she always dreamed of in New York; she asks Pete to come with her, but he declines and tells her that her appetite for success and fame will never end. Lanie sadly leaves for New York.

Pete meets Jack and tells him how wrong he is, as Lanie got the job which Jack foretold she would not get. But Jack explains that he was right as Lanie will never be able to get the job as she’ll die before it begins; he again gives a prophecy of a death of a famous former baseball player in a plane crash. Pete receives the news of the death of the baseball player as foretold by Jack, and tries to call Lanie to warn her. When he cannot reach her, he also flies to New York. Lanie, unconcerned with Jack’s prophecy, interviews her idol, famous media personality Deborah Connors (Stockard Channing). Lanie realizes how petty the opening questions are and shares a heartfelt moment with Deborah live on air. The interview receives which receives huge television ratings. The network immediately offers her a position, but Lanie declines, realizing that she wants a life with Pete in Seattle. As she leaves the studio, a police officer gets into a conflict with a man, who shoots a bullet into the air. Pete tries to warn Lanie across the street, but she is shot in the crossfire. Luckily, Lanie survives, and Pete tells her in the hospital that he has loved her since the first time he saw her; Lanie says she loves him, too. Later, Pete, Lanie and Tommy watch Cal’s baseball game, where Lanie (in a voiceover) says that one part of her has died—the part which didn’t know how to live a life.

Enjoyable film which has both a strong satirical edge and an introspective, philosophical tone. Jolie is fab as the shallower than shallow career journalist who has her life changed by a modern day soothsayer