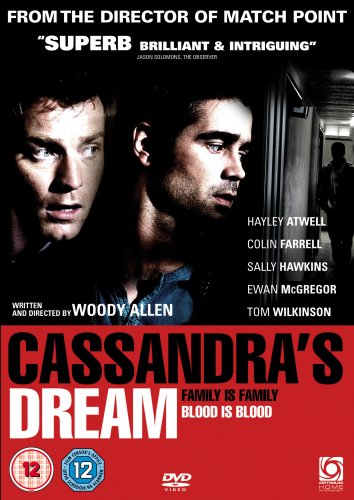 Brothers Terry (Colin Farrell) and Ian (Ewan McGregor), who live in South London, were raised by a weak father Brian (John Benfield) who runs a restaurant, and a strong mother Dorothy (Clare Higgins) who taught her sons to look up to their uncle Howard (Tom Wilkinson), a successful plastic surgeon and businessman.

The brothers buy a sailboat at an oddly low price, despite its near pristine condition. They name it Cassandra’s Dream, after a greyhound that won Terry the money to buy the boat. Knowing nothing of Greek mythology, they are unaware of the ominous antecedents of this name—the ancient prophetess Cassandra, whose prophecies of doom went unheeded by those around her. While driving home from a day’s sailing in a borrowed car, Ian crosses paths with beautiful actress Angela Stark (Hayley Atwell), with whom he becomes infatuated.

Terry has a gambling addiction that sinks him deeper in debt. Ian wishes to invest in hotels in California to finance a new life with Angela. To overcome their financial issues, they ask Howard for help. He agrees to help them, but asks for a favor in return: they must murder someone for him. Howard faces imprisonment for unspecified crimes and his future is threatened by Martin Burns (Phil Davis), a former business partner who plans to testify against him. Howard asks his nephews to get rid of Burns, and in return he will reward them financially. After initial reluctance, the brothers agree. They make two zip guns, untraceable and easily destroyed. Lying in wait in Burns’ home, their plan is foiled when Burns arrives with a woman. Their resolve shaken, they leave and agree to commit the murder the next day.

The next day, they succeed in carrying out the murder and later destroy the guns. Ian is content to move on as if nothing happened, but Terry is consumed by guilt and begins abusing alcohol and other drugs. His behavior frightens his fiancée (Sally Hawkins), who tells Ian about the situation and that Terry believes he has killed someone. After Terry confides that he wants to turn himself in to the police, Ian goes to Howard for advice. They agree there is no alternative but to get rid of Terry. Ian plans to poison Terry during an outing on the boat. Ian can’t bring himself to kill his own brother, and attacks him in a fit of rage. In the chaos, Terry knocks Ian down the steps into the cabin, killing him.

The boat is later discovered adrift by the police, and the audience learns that Terry snapped and drowned himself after killing his brother. The last shot is of Cassandra’s Dream, still in beautiful condition despite the tragedies it set in motion.

Really good drama from woody Allen that shows his versatility and ability at writing drama. Definitely worth a watch even if you’re not a woody Allen fan.