The story takes place in the sleepy and decaying suburbs of Grosse Pointe, Michigan during the 1970s, as a group of neighborhood boys, now grown men acknowledging in voice-over (narrated by Giovanni Ribisi who speaks for the group as a whole) reflect upon their life-long obsession and memories of the five entrancing Lisbon sisters, ages 13 to 17, and whose beauty had bewitched them as teenagers. Strictly unattainable due to their Catholic and overprotective, authoritarian parents, math teacher Ronald (James Woods) and his homemaker wife (Kathleen Turner), the girls — Therese (Leslie Hayman), Mary (A. J. Cook), Bonnie (Chelse Swain), Lux (Kirsten Dunst), and Cecilia (Hanna R. Hall) — are the enigma that fill the boys’ conversations and dreams.

The film opens in the summer with the suicide attempt of the youngest sister, Cecilia, as she slits her wrist in a bath. After her parents allow her to throw a chaperoned basement party intended to make her feel better, Cecilia excuses herself and jumps out her second story bedroom window, instantly dying when she is impaled on an iron fence below. In the wake of her act, the Lisbon parents begin to watch over their four remaining daughters even more closely. This further isolates the family from the community and heightens the intrigue and air of mystery about the girls to the neighborhood boys in particular, who long for more insight into the girls’ unfathomable lives. 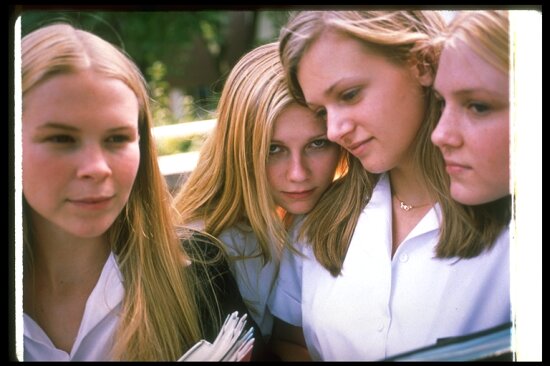 At the beginning of the new school year in the fall, Lux forms a secret relationship and short lived romance with Trip Fontaine (Josh Hartnett), the school heartthrob. Trip comes over one night to the Lisbon residence to watch television and persuades Mr. Lisbon to allow him to take Lux to the upcoming Homecoming Dance by promising to provide dates for the other sisters, to go as a group. After winning Homecoming king and queen, Trip persuades Lux to ditch the group and have sex on the school’s football field. Afterwards, Lux falls asleep and Trip, becoming disenchanted by Lux, abandons her. At dawn, Lux wakes up alone and has to take a taxi home. Several years later, Trip will admit to wrongfully abandoning Lux, but ironically confesses that he has never gotten over her.

Having broken curfew, Lux and her sisters are punished by a furious Mrs. Lisbon by being taken out of school and sequestered in their house of maximum security isolation. Unable to leave the house, the sisters contact the boys across the street by using light signals and sharing songs over the phone as a means of finally sharing their unrequited feelings. During this time, Lux rebels against her repression and becomes promiscuous, having anonymous sexual encounters on the roof of the house late at night; the neighborhood boys spy and watch Lux in action from across the street. Finally, after weeks of confinement, the sisters mysteriously leave a note for the boys, presumably asking for help to escape. When the boys arrive that night ready to run away with the girls, they find Lux alone in the living room, smoking a cigarette. She invites them inside to wait for her sisters, while she goes to start the car, leading the boys to believe they will soon elope with the girls. While they wait, the boys briefly fantasize the group of them driving blissfully away on a sun-soaked country road. 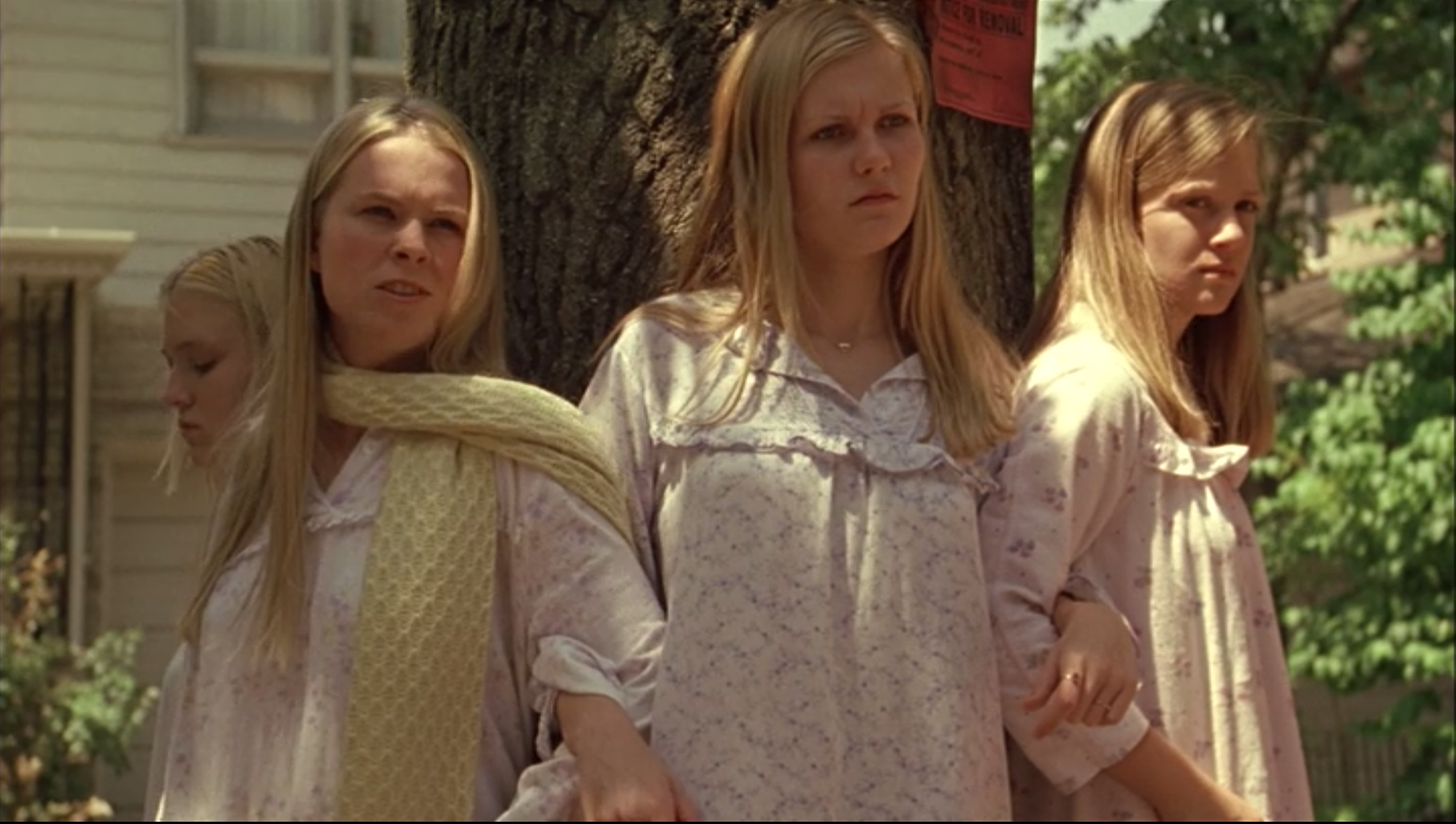 Curious, the boys wander into the dark basement after hearing a noise and discover Bonnie’s dead body hanging from the ceiling rafters. Horrified, they rush upstairs only to stumble across the dead body of Mary. The boys realize that the girls had all killed themselves in an apparent suicide pact moments before: Bonnie hanged herself; Mary died by sticking her head in the gas oven shortly after; Therese died by taking an overdose of sleeping pills and Lux, being the last one to go, died by Carbon monoxide poisoning, when she left the car engine running in the sealed garage. But there is no sole explanation why.

Devastated and puzzled by the suicides of all their children, Mr. and Mrs. Lisbon quietly flee the neighborhood, never to return. Mr. Lisbon had a friend clean out the house and sell off the family belongings, especially those belonging to the girls, in a yard sale; whatever didn’t sell was put in the trash, including the family photos, which the neighborhood boys collected as mementos. When the house is emptied, it is quickly sold to a young couple from the Boston area. Seemingly unsure how to react, the adults in the community go about their lives as if nothing happened or that the Lisbons ever lived there. But the boys never forget about the girls however much they try, though everyone else eventually does. And the girls will forever haunt them and remain a source of grief and lost innocence for them, long into adulthood. As the film closes, the men acknowledge in voice-over, saying that they had loved the girls. And that they will never find the pieces to put them back together, to understand why the Lisbon sisters went to be alone in suicide for all time.

This is a great film, despite the tragic end. Nicely shot and superb acting. The best film I’ve seen Kirsten Dunst in.