Violet Sanford (Piper Perabo) leaves her hometown of South Amboy, New Jersey, her father Bill (John Goodman), and best friend Gloria (Melanie Lynskey) to pursue her dreams of becoming a songwriter in nearby New York City. The pizza shop where she works has a wall covered with the autographs of employees that left, hoping to make it big, and Violet adds hers to the wall.
Violet tries unsuccessfully, a lot of times, to get her demo tape noticed by the recording studios. One night, she tries to get herself noticed by a music industry scout. The bartender jokingly points out Kevin O’Donnell (Adam Garcia), making her believe that he is the bar owner. When the joke is discovered, Violet feels that Kevin was making a fool out of her. With only a few dollars left in her pocket after her apartment is robbed, she goes to an all-night diner and notices three girls, Cammie (Izabella Miko), Rachel (Bridget Moynahan), and Zoe (Tyra Banks), flaunting the hundreds of dollars in tips they earned. After inquiring, she finds out that they work at a trendy bar named Coyote Ugly. 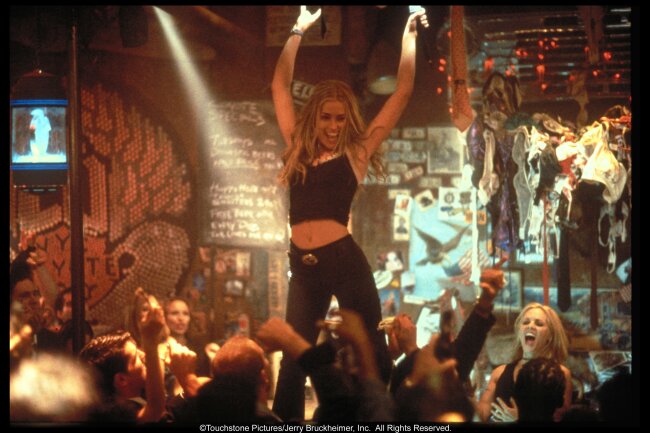 She finds her way to the bar and convinces the bar owner Lil (Maria Bello) to give her an audition. Violet’s first audition does not go well; but after breaking up a fight between two customers, Lil agrees to give her a second audition. At her second audition, Violet douses the fire warden in water costing Lil $250. In order to keep her job, she has to make up $250 in one night. Kevin turns up at the bar, but ends up being auctioned off to one of the women in the bar. In order to pay off her debt to Kevin, Violet agrees to go on four dates with him. The two begin a relationship. 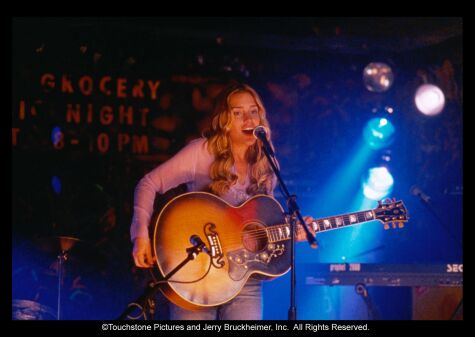 Kevin commits himself to helping Violet overcome her stage fright so that she can sell her music. Violet’s stage fright was shown to be inherited from her mother who also came to New York to be a singer. Also shown is Violet’s ability to sing to songs that she did not write. We learn this when she sings on the bar in the bar in order to save the necks of Cammie and Rachel who were trying to break up a fight between the customers.

One night a patron takes a picture of Violet in the middle of a raunchy move and with water pouring on her. When the picture appears in the paper, Violet’s father happens to see it and gets angry at her. She continues to pursue her dream, though, despite being sidetracked with work at the bar. She gets fired when Kevin gets into a fight at the bar. She returns to New Jersey for her best friend’s wedding and makes her way back to New York when her dad was in a car accident. Later she performs at an open mic night at the Bowery Ballroom with the Coyotes from the Coyote Ugly saloon, her father, her best friend, and Kevin all there for moral support. The performance goes over very well and she finally lands a deal with a record label. The film concludes back at Coyote Ugly with LeAnn Rimes, having recorded Violet’s song, singing on the bar as Violet joins in.

This film is absolutely brilliant.  It is definitely a must see film.