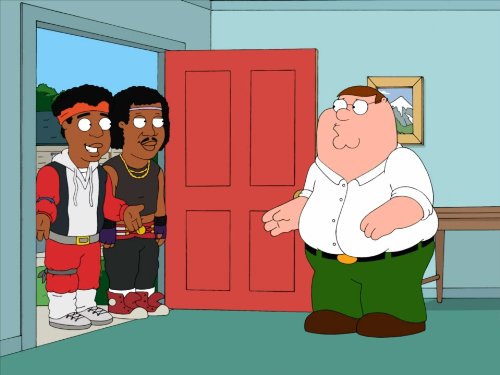 The next morning, as the family is eating breakfast, Lois reveals her intention to become a surrogate mother for Naomi and Dale, causing Peter to become upset at the thought of her being pregnant for nine months. Despite this, Lois decides to go to Dr. Hartman to have the in vitro fertilization performed, enduring more of Dr. Hartman’s shtick involving celebrity crossbreeds and having a tribe of bush men implant the egg with blowguns. A pregnancy test comes back positive the next day, and a furious Peter attempts to cause Lois to have a miscarriage before ultimately confronting her about the pregnancy. While she continues asserting her intention to provide a child to Naomi and Dale, Quahog 5 News suddenly reveals that Naomi and Dale died in a car crash. Devastated by the announcement, Lois questions whether she should have an abortion or continue with the pregnancy and put the baby up for adoption.

In an attempt to come to a decision, Lois and Peter decide to visit the local family-planning center, and ultimately decide to abort the embryo. However, as Peter exits the center he encounters an anti-abortion rally, where he is shown an anti-abortion video by one of the protesters. The video causes him to reconsider about aborting the unborn baby. Returning home, Lois continues to advocate her right to choose, while Peter now attempts to argue the unborn child’s right to life and whether Lois has the responsibility of carrying it to term. At their wits’ end, the two decide to discuss the matter, once and for all. The next day, Lois talks with the family about “the wonderful new member of the Griffin family”, but then, after a few seconds of silence, Peter turns to the camera and says to the audience “We had the abortion”, promptly ending the episode

I think the censors were a bit heavy-handed to ban this episode from TV, I’ve seen more risque things said on The View! Having said that, the episode is very funny with Seth MacFarlane at his satirical and uninhibited best!! The extras are also worth watching – in particular, the Seth and Alex (almost live) Comedy Show, which had me in stitches!