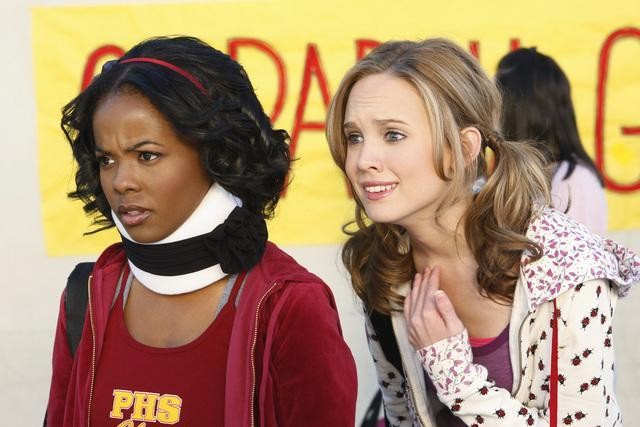 I was positive that I would be in for bad acting and a horrible script (The Secret Life of the American Teenager, anyone?). However, upon watching the first few episodes I found that the only problem with this show is that is it way too short for me to get my fill. The show’s storyline is split between that of Bianca and Kat, two completely opposite people. Kat’s story consists of her efforts to make men value her more despite their sexist views, and of short, but charming, interactions between her and the school bad boy. Bianca’s consists of her quest for popularity and her obliviousness admirer, Cameron.  Both story lines can be amusing, but I doubt that anyone really watches for both. Either they’re a fan of Kat and Patrick, or they are rooting for Bianca to replace Chastity as a head cheerleader and steal her football-playing boyfriend . In the movie, the two story lines were linked together in some way, but in the show they only intertwine when Kat and Bianca argue at the dinner table, which is where the separation of fans comes from.

Though Meaghan Martin plays a funny, bubbly teen very well, Dana Davis plays the bitchy popular girl so convincingly, and Nick Braun plays the awkward, dorky, and  secret admirer as if that is who he has been his entire life anyhow,  they really deserve accolades. Larry Miller plays the part of a psychotic father in such a charming and funny way that I can’t help but adore every scene he is in. There is definitely a reason he got the part of the father in both the movie and TV show. The strong acting is great since his character is responsible for what little tie the sisters have to one another in the show and creates good family humor.

Lindsey Shaw is so convincing in her character that I can’t imagine any other actress even attempting to play it. She has a natural energy that shines through in her character and she can deliver comical lines like no other. In fact, I probably laugh at her dialogue more than any other character’s simply because of the way it comes out of her mouth. Kat gradually goes through a personal growth throughout the show and the audience can watch as someone so sure of herself fights to stay on track and stick to what she has preached. It’s quite intriguing.

Ethan Peck, though soft-spoken and not exactly convincing as the bad boy he is supposed to play, delivers a good, unique version of Patrick Verona. While in the movie the character really seemed as if he could have lived up to the rumors everyone had heard about him, I don’t get that from this version of Patrick. To me, he seems like the misunderstood kid that wants to appear scary only so that people will leave him alone and so that he can be sure anyone that does make an effort to get to know him is worthwhile.

Overall, this show is just downright hilarious and the characters are endearing and addictive. The sarcasm alone is funny, but the characters themselves have such strong personalities, each one with their funny little quirks. The best thing is that the characters don’t seem one-dimensional like so many other TV characters are. Sadly it’s another show that lasted just one season but it is one heck of a good season.