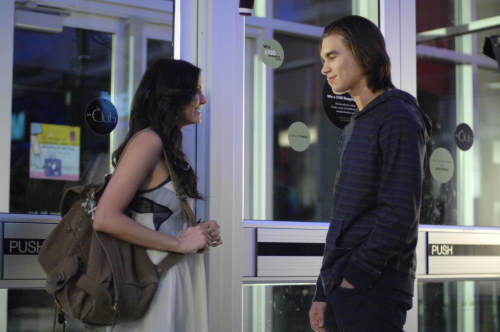 The American Mall is High School Musical taking place at – you guessed it – the mall, where part-time, teenaged employees sing their way through life while trying to remain one step ahead of a bratty nemesis. The film is brought to you by the same producers behind HSM, so the similarities are both obvious and expected. But, The American Mall lacks a lot the sparkle.

The American Mall sifts through Ally’s (Nina Dobrev) dreams of rock stardom and her anxious anticipation about choosing between the practical college her mother wants her to attend and the music conservatory she prefers. What’s more, she must navigate the cliques that make adolescence and high school social misery for most of the population. There’s a whole series of high school archetypes at play and the characters are familiar clichés: the spoiled princess, the uber-talented girl-next-door, and the sensitive, good looking young chap who sings while he serves as the mall janitor. The theme of music as a unifier and a common language is woven throughout each scene, while Ally and Joey the Janitor (Rob Mayes) speak more effectively through shared tunes than they do with words. There’s no satire of teen life; this isn’t Clueless or even Mean Girls, poking fun at stereotypes while using au courant colloquialisms to update and authenticate the material. Rather, with its candy-colored, ultra-bright hues, its slick musical numbers and its tidy ending, The American Mall prefers not to always represent real life.

If the dance numbers were a little snappier and the songs a bit edgier, The American Mall might appeal to a vast audience, like adults with a nostalgic appetite, but it prefers to pitch its tent in the pre-teen population’s orbit and is content to sleep there. It’s a romp that’s an audio-visual spectacle but not satiating for the soul, perhaps best evidenced by the sequence when temptress Madison (Autumn Reeser) attempts to seduce Joey. The number is sexified and the screen is split, music video style, but it exists merely to set up a dramatic story arc that needs a neat climax. The movie unfolds like a super-sized episode from a kid-friendly TV series about the instantly solvable rigors of adolescent existence. The only reason to watch this if for Nina Dobrev