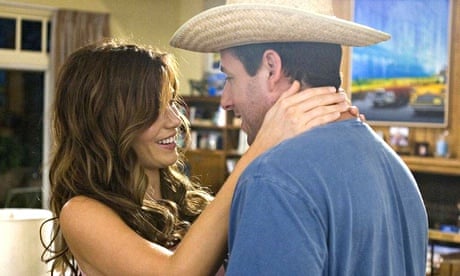 Michael Newman is overworked and under appreciated by his boss, worse still, he doesn’t have enough hours in the day to devote time to his loving family. But then he happens upon eccentric salesman Morty, who puts a universal remote control Michael’s way, a control that perfectly controls his life…….at first.

Films that deal with second chances via gods, angels and devils are not in short supply, everything from the mighty It’s A Wonderful Life, to the amiable Mr Destiny have covered this fantastical field. Enter Click, starring Adam Sandler {Newman}, another spin on the genre with the added kick of encompassing modern day technology into the equation. Split very much into two vastly different halves, Click finds Sandler reining in his usual shouty goof ball persona. Naturally for the first part we get the comedy set ups, at times hilarious and at others a little crass, but it’s never sledgehammer comedy of the like that Sandler has previously served up in spades. The reason for the restraint becomes evident when the films second half arrives, full of emotional fortitude it’s something of a shock at first to grasp the switch in tone, but it works real well, and it’s testament to Sandler’s straight acting ability that he manages to sway the viewer into this fantastical realm.

Click is no genius piece of work, and for the genre it tackles it’s probably some way short of being up with the best. It does however punch the right buttons. From Sandler and a highly accomplished supporting cast {Kate Beckinsale, Christopher Walken, Sean Astin and Henry Winkler}, to its delightful and rewarding finale, this most definitely is one that is worth punching play.