Well, if you’ve seen even one episode of “The Challenge Of The Super Friends” you know it’s no Hall Of Fame animated classic – at least not as far as the continuity is concerned. There are some very grievous errors that are hilarious to spot. For instance in the episode “The Time Trap” three sets of the Super Friends get trapped in various eras of earth’s past, among them Batman & Robin who are captured and held by the troops of one of the Roman emperor Caesars. In the present day Superman discovers a clue that can pinpoint the time frames each of the set of heroes is being held so off he goes to the lab to have the piece of evidence analyzed; and who should be there amongst the other Super Friends waiting for the analysis – none other than Batman himself! Maybe he was just there in spirit and only we (the fans in Saturday morning TV land) could see him? Another sparkling moment comes in the episode “The Monolith Of Evil” when suddenly Green Lantern has three arms – I can’t tell if he has more than one power ring. Other blunders that happened periodically were Hawkman missing his wings; the inversion of colors and/or direction of logos on the uniforms of Batman & Robin; Green Lantern’s power ring would emanate a yellow  glow instead of green and, best of all, the Flash would go flying off  with Superman and Hawkman whenever it was convenient to the plot. The Flash had no capability of flying in any of his comic book appearances that I can remember – and you’d think the creative staff behind the show would be aware of that. But these are all forgivable mistakes to the fans of the series because it’s the strong points of the show that make it the classic that is revered by fans still to this day. 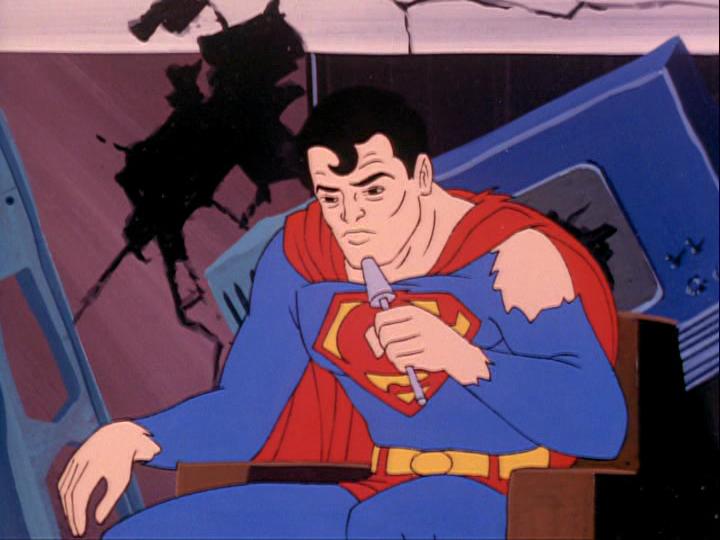 The positives of this program are many beginning with the vibrant theme music; heroic and majestic sounding it is reminiscent of the theme for the classic early 60’s animated cult favorite ‘Johnny Quest’. It certainly wouldn’t surprise anyone to discover that this quite probably was the inspiration behind it. The idea of ‘The Legion Of Doom’ is a great concept that is still unsurpassed. Scavenging back through the vaults and archives of DC Comics to get the right mix of villains must have been daunting at the time and not as easy to piece together as it appears when seeing the show. There were literally tons of adversaries, antagonists and nemesis’s to choose from and creating a balance – that is a viable and believably powerful enough force to challenge the Super Friends – wasn’t something that just jumped out at you I’m sure. Seeing such archenemies as Sinestro, Gorilla Grod and Gigantress in television animated form is a rare treat that is doubtful to happen ever again. The headquarters for ‘The Legion Of Doom’ is equally as impressive. They could go anywhere they pleased as a group; outer space, inner earth, backwards or forward in time, etc. The Super Friends on the other hand all have their own separate forms of transportation – and the Hall Of Justice is anchored to the ground permanently. While the stories are unquestionably juvenile in conception some of them still remain quite entertaining. My favorites are “Fairy Tales Of Doom” and especially “History Of Doom”, and the episode “Secret Origins Of The Super Friends” is also memorable.

The DVD set is nicely packaged and has an excellent 13 minute mini-documentary titled ‘Saturday, Sleeping Bags & Super Friends: A Retrospective’ that I think every fan will be pleased with. Also included are bios on each of the Super Friends and also the members that make up ‘The Legion Of Doom’ that I found indispensable. If I had one quibble at all it would be the title of the set “The Challenge Of The Super Friends: The First Season”. This confused many people, but what Warner brothers have done is “Challenge” when aired would have two segments the first would be a Challenge of the  the Super Friends episode and then a separate Super Friends Episode, these separate episodes were released on a second set.