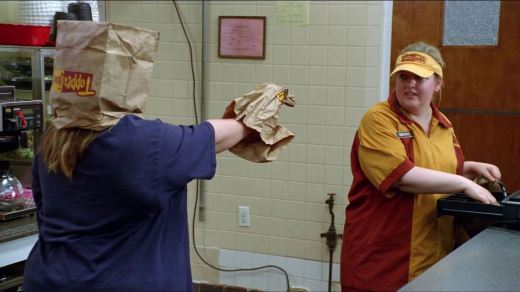 A road trip comedy starring Melissa McCarthy and Susan Sarandon and co-written by McCarthy and her husband Ben Falcone, who makes his directorial debut. Tammy (McCarthy) finds her life in a mess after she loses her job at fast-food chain Toppy Jacks and discovers her husband Greg (Nat Faxon) cheating on her with neighbour Missi (Toni Collette). Deciding to leave town and head to Niagara Falls, Tammy, who is in need of money and a vehicle for the trip, has no choice but to bring along her grandmother Pearl (Sarandon). As their journey progresses it becomes clear that Pearl is an alcoholic and while trying to look after her, Tammy gets involved in various misadventures including the robbery of a Toppy Jacks. The film also stars Kathy Bates, Dan Aykroyd and Allison Janney.

Tammy is a road trip movie, with the unlikely pairing of a train wreck of a woman (Tammy, played by Melissa McCarthy) and her alcoholic grandmother (Pearl, played by Susan Sarandon). The two are sick of their lives and set out to go to Niagara Falls with no real plans or solid ideas. Along the way, Pearl’s drinking is at first funny, but eventually reveals itself as dangerous and ugly. Her treatment of Tammy is by turns loving and hurtful, and contributes to the maturing process that Tammy goes through during the movie. All good road movies should have characters who are somehow changed by their experiences, and this one does. Pearl learns to control her drinking (and the casual sex, reckless driving, insults, and breast-baring incidents it causes). Tammy learns that she must actively pursue the life she wants and not just wait, complaining, for it to happen to her.

The movie is both funny and dramatic. The scene in which Tammy sobs because she thinks her grandmother is dead was heart-wrenching. As well, the scene in which Pearl calls Tammy a fat loser was bitter. Both McCarthy and Sarandon played their parts well.I first thought the movie was going to be pure comedy, mostly because of the marketing, but I came to realize that it was actually a road trip/romantic comedy.