Frank (Rainn Wilson), a not-that-bright, not-that-handsome guy who can count the good things that have happened to him on one hand and who works as a cook at the greasiest spoon you’ve ever seen, has lost his recovering-addict wife (Liv Tyler, The Lord of the Rings)–one of those precious few good things–to a sleazy, drug-dealing club owner (Kevin Bacon). This unbearable injustice is the last straw for Frank, who has, to be sure, experienced no shortage of injustice in his time. After some surreal, hallucinatory soul-searching, and egged on by young, hyper Libby (Ellen Page)–a comics-shop clerk who nags her way into the role of his official sidekick–he becomes “The Crimson Bolt,” a fed-up DIY superhero who is going to not only save Frank’s wife and get them back together, but also make the world safe at long last for all the nice, mild-mannered people who have had enough of playing doormat for the world’s pushers (of all kinds) and shovers.

Frank is at the end of his rope; overstimulated Libby is terminally bored. They are in way over their heads, but they are too inspired to care, and The Crimson Bolt, accompanied by sidekick “Boltie,” can be heard to utter his catchphrase, “Shut up, crime!” as they use their trademark pipe wrench (for The Bolt) and Wolverine claws (Boltie) to whip violators into shape; whether you are a child molester or a smug, self-centered jerk who cuts in line at the movies, you had better watch out, because their adrenaline is pumping, and you are likely to end up in the emergency room with severe lacerations or a crushed skull. Gunn shies away from neither the ghastly injuries nor the pleas and cries of pain emanating from those on the receiving end of justice, Crimson Bolt-style. By now, we have been intentionally “shocked” often enough by movie violence, whether it be the flippant, choreographed Reservoir Dogs kind or in the devastating (and, I think, much more conscientious) Funny Games mode.

In the case of Super, though, the Taxi Driver comparisons Gunn has garnered for his film are apt; regardless of how many movies and TV programs may encourage cheering it on, “justified” violence is as ugly and difficult to stomach as any other kind, and it may even be more painful to watch a character whom you can relate to and whom you know to be acting out of conscience doing such unconscionable things. But Gunn’s film is quite different from Scorsese’s masterpiece in its willingness to wear its heart directly on its sleeve. 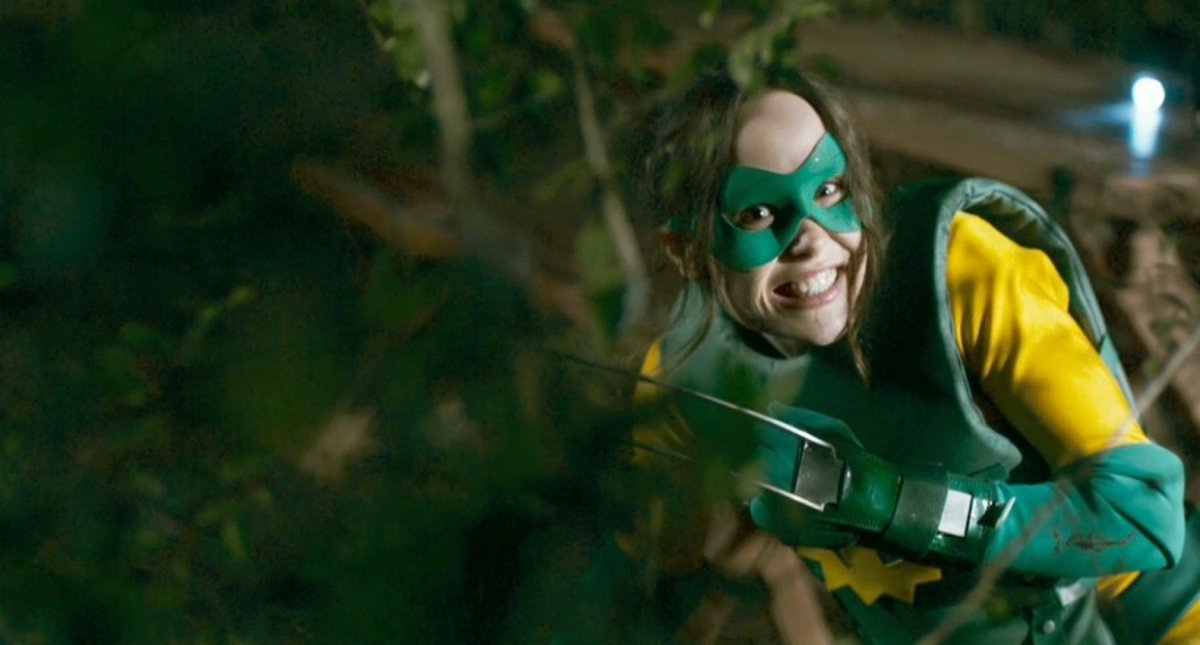 Both Frank and Libby are damaged people whose emotions have been run roughshod over by life, they are rife with insecurities and uncertainties, and they want the reassurance of a fantasy world in which one’s moral certitude translates into real action and results. It is very, very easy for us to understand and sympathize with them…but then we cringe at the cruelty they rather randomly inflict as retribution for life’s crumminess (not to mention at the uneasy romantic tension that develops between the very married Frank and Libby, with her underfed emotional and sexual appetites). Gunn does not skimp on fully exploring either the righteousness of Frank and Libby’s rage or the unacceptable brutality that results from it; Libby’s comics-bred (over)enthusiasm might be able to override her less-than-fully-developed conscience, but Frank’s is too powerful not to impede his enjoyment of what they are up to, and he also seems burdened by the felt responsibility of being the older one, Libby’s role model and moral compass.

A great deal of the credit for the film’s ability to move us belongs to its actors. When it comes to embodying Frank in all his poor, pathetic put-upon-ness. It would have been a tragic misfire to play such a character as a dismissable laughing stock, and Wilson fortunately avoids that entirely, making Frank a character whose feelings are very real and every bit as valid as any of ours would be. Page does the same for the misguided but charming Libby, with her fumbling but authentic sexuality and her game-for-anything attitude that is hard not to like even as it tips her right over the deep end. It grows into a real pleasure as the film goes on, seeing the actors match, scene for scene, the physical boldness necessary for all their maladroit running, jumping, and ass-kicking with the emotional courage required to sympathetically depict their characters’ social and romantic clumsiness. Tyler and Bacon shine in their smaller parts, too.

Gunn has not only pulled off his risky idea with aplomb, but at the visual level alone, he and cinematographer Steve Gainer have used the red digital video camera with a great feel for the visuals it can provide and the way the images it can produce–distinct from film, but offering a full palette from which to work cinematically–are able to serve the film’s story and tone. They expertly create a world for Super that is not movie-“ordinary” but really ordinary, in the litter-on-the-streets, used-car, rundown-buildings kind of way; the walls of Frank’s workplace, Libby’s apartment, and the comic book shop appear to actually be sweating. (Gunn uses a lot of handheld camera to add to the inelegance of “real life,” and for once it is an actually suitable as opposed to merely cool choice, really contributing something important to the film’s feel.) That realism clashes with some of the more graphically poppy, self-conscious elements in the film such as comic-book titles appearing up now and then in the most unlikely circumstances and, of course, Frank’s and Libby’s brightly colored costumes standing out starkly against the drab environment), and the jarring shifts works quite well to complement, on the visual level.